Reduced water flow is a contributor to the declining number of platypus in Australia. This reduced flow can be attributed to factors in both the natural and built environment. Drought caused by an extended period of low rainfall results in lower surface runoff finding its way into streams. Smaller creeks and tributaries may dry up completely and larger creeks may be reduced to a series of pools. With climate change, these periods of lower rainfall in parts of Australia is becoming more common and lasting for longer periods. 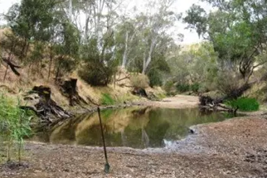 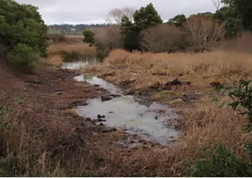 Water extraction or removal also contributes to reduced water flow in streams and rivers. Humans often disrupt the flow of water by pumping water out of streams and diverting it for agricultural or industrial uses, such as irrigation of farming land. Any decrease in water flow will have the following implications for the platypus: A reduction in the overall amount of habitat; An increased incidence of predation as the platypuses are forced to travel across land or access shallow pools to find suitable habitat; A decrease in the amount of prey available especially aquatic invertebrates

As the built environment increases with more housing on smaller blocks /more roofs/ more sealed surfaces like driveways, footpaths, and roads there is an increase in the amount of surface runoff from these areas flowing into the surrounding creeks. This runoff or stormwater also reaches these creeks quicker as there is less infiltration. This excess flow increases the amount of erosion of the creek beds and undercutting the creek banks and sedimentation of the stream channel. Increased stormwater can also increase the amount of litter and debris washed into waterways. The overall effect is to disrupt the supply of food and cause the loss of platypus burrows and eggs and even young juveniles. 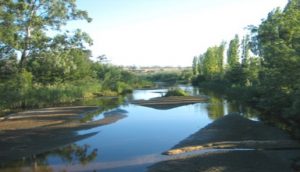 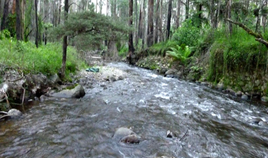 Clearing vegetation along river banks to create more farmland (especially for an animal stock like cattle) destabilizes the banks. The banks can collapse causing the build-up of sediment, the siltation of channels, and water flow to stagnate. The finer soil particles can cloud the stream (increasing turbidity) reducing sunlight and oxygen levels. Both the fine and heavier sediments degrade the amount of suitable habitat, especially for the bottom-dwelling macroinvertebrates and as a result, reduce the available food supply for the platypus. 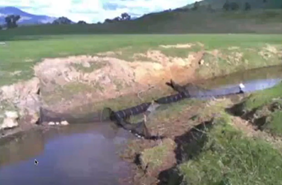 The use of nets to catch freshwater yabbies and other crayfish and the use of fish traps can lead to platypus being tangled and trapped in the netting or wire mesh and being injured or drowned. Other animals like turtles and the water otter or rakali can also suffer from fatalities. Studies have shown illegal netting to be a major cause of death of platypuses. 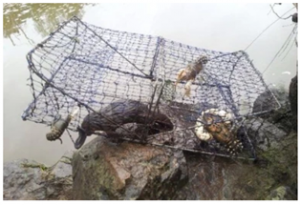 Litter is often washed into waterways from storm water drains and during floods. This litter is caught and trapped along river banks or snagged in the stream along with other debris. Platypuses are susceptible to becoming entangled by some of this material which can lead to injuries or even death especially if it encircles their neck or bodies. The main causes of death are plastic rings, hair ties, rubber bands, hand bracelets, cable ties, and six-pack holders, etc. which wrap around their necks, webbed legs, or caught in their bills. 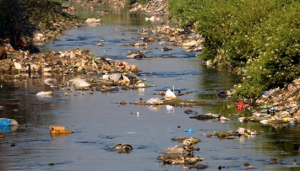 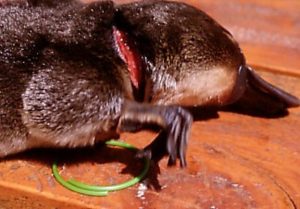 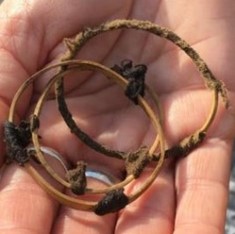 Platypuses are vulnerable to a number of native predators like eagles, hawks, and goannas. They are also vulnerable to predation by introduced animals like dogs and feral animals like foxes and wild cats. Unsupervised domestic dogs around waterways can be a problem. Predator attacks often occur when platypuses are traveling overland between feed and nesting sites and isolated water bodies. Some evidence that water rats may take eggs. 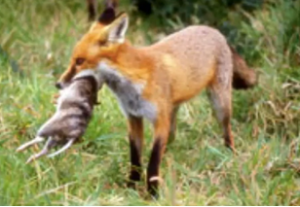 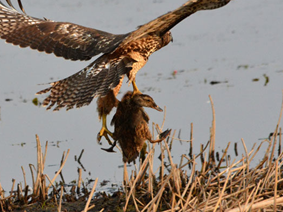 Platypuses can tolerate poor water quality and have been spotted in degraded waterways. However, changes to water pH, temperature, turbidity, and excess nutrient load can indirectly impact them by affecting their food supply. For example, additional sediment runoff from land clearing can add to turbidity levels and carry fertilizers changing pH levels. Unseasonal water releases from reservoirs are often cooler than would be normal. 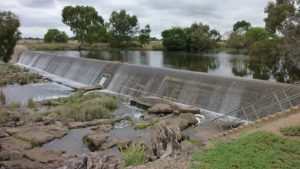 People often build weirs and bridges along creek lines which alter the flow of water and impact the nearby river banks. These structures can fragment platypus populations by hindering movements along the waterway. Water flow downstream of a weir or small dam is generally lower and provides less suitable habitat and diminished aquatic ecosystems for other plant and animal communities.  The deeper water upstream of the weir often provides less habitat, because platypuses prefer to forage in water less than 3 meters in depth. Other built structures like storm water drains and sewerage lines are often found built along creek lines. These can overflow during floods discharging excess water into the stream and result in problems such as increased erosion. Some of these constructions replace the natural creek lines and banks resulting in the loss of potential platypus burrows. 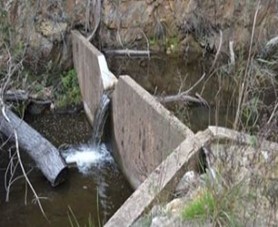 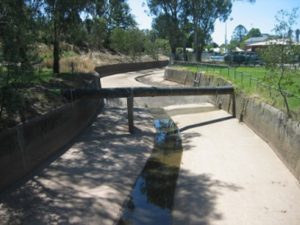 The recent summer fires have seen a large amount of burnt ash wash into creeks causing deoxygenation and fish kills in a large number of streams across NSW. Fires have resulted in the death of large numbers of native species and the loss of habitat and food sources.

Help Platypus Conservation and Education in the Hills Shire